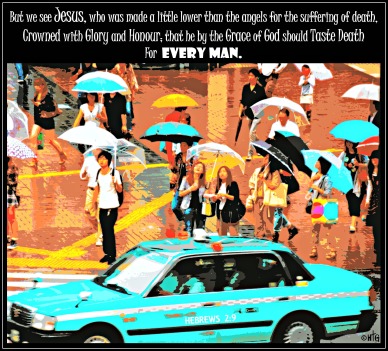 In Hebrews 9:9-14 the Bible calls sacraments or religious rituals through which men try to reach God “dead works.”

9 Which was a figure for the time then present, in which were offered both gifts and sacrifices, that could not make him that did the service perfect, as pertaining to the conscience;

10 Which stood only in meats and drinks, and divers washings, and carnal ordinances, imposed on them until the time of reformation.

11 But Christ being come an high priest of good things to come, by a greater and more perfect tabernacle, not made with hands, that is to say, not of this building;

12 Neither by the blood of goats and calves, but by his own blood he entered in once into the holy place, having obtained eternal redemption for us.

13 For if the blood of bulls and of goats, and the ashes of an heifer sprinkling the unclean, sanctifieth to the purifying of the flesh:

14 How much more shall the blood of Christ, who through the eternal Spirit offered himself without spot to God, purge your conscience from dead works (Gk. “nekron ergon“) to serve the living God?

There is only one other place in this epistle that this Greek term “nekron ergon” is used, and that is Hebrews 6:1.

“Therefore, laying aside the principles of the doctrine of Christ, let us go on to maturity, not laying again the foundation of repentance from dead works (nekron ergon) and faith toward God.  Of the doctrine of baptisms and laying on of hands, and of resurrection of the dead, and of eternal judgment.”

The object of repentance in this verse is stated plainly as “dead works.”  As noted, the author of the Epistle to the Hebrews uses this term as a reference to ritualistic religious works by which man seeks to reach God.

Is this passage soteriological?

The author offers three parallel couplets within verses 1-2 which he identifies as: the “first principles of Christ“–taes arxaes tou Xristou logon,” and the “foundational elements”–themelion, of the doctrines of Christ.

1.  “Repentance from dead works and faith toward God.”

2.  “the doctrine of baptisms and laying on of hands.”

3.  “resurrection of the dead, and of eternal judgment.”

The couplets are easily discernable by anyone who reads the context, and are further demanded by the Greek language.

There are at least three different words for “and” in Greek,” kai, te and de.  In the verses above, the two related elements in each couplet are held together by the word “kai,” a very strong connection, confirming the the relationship between these two concepts.

and (the doctrine of baptisms & laying on of hands)

and (the resurrection of the dead & eternal judgment).

This probably doesn’t teach most of us anything new, since the arrangement of couplets is generally obvious to most readers form the English text, but it confirms from Greek grammar the conclusions we have drawn from English.  And the analysis of these couplets reveals another obvious pattern.

The first couplet deals with the doctrine of salvation, “of repentance from dead works, and faith toward God), an event that occurs at the very beginning of the Christian life.

The Biblical command is clear.

Like the person on page 14 of The Gospel Booklet, he must put his “money” back in is pocket and accept eternal life as a free gift!

Faith in Jesus will not save you if, while believing that Jesus died for your sins, you also believe that you must be baptized, go to church, or obey the Ten Commandments to “help” get you to heaven.  You cannot simply add Jesus to a long list of other things that you must do or be to get to heaven.  You must utterly reject all of those other things as having no saving value whatsoever and trust in Christ alone.

Thank you to Ronald Shea.

Part 7, “Saving Repentance about the Work of Christ”.

9 thoughts on “Repentance from Religious Rituals”